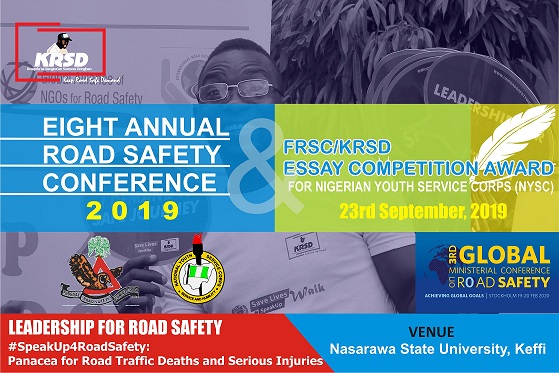 The theme for the conference is ‘Leadership for Road Safety’ and the roundtable discussion topic is ‘Speak up for Road Safety panacea for road deaths and serious injuries’.  The event is meant to identify the main road safety issues in Nigeria from the decision-makers’ perspective. Concrete road users’ experiences will be raised to inspire leaders to take action by showcasing strong leadership for road safety within governments, international agencies, NGOs, Media houses, schools, universities and private companies. The event will also provide an excellent occasion to discuss modalities of improving road safety in Nigeria and Africa to save lives. During the conference, we would also present awards to the three (3) Youth Corpers that are exceptional in their essays for the FRSC/KRSD Essay Competition 2019.

Nasarawa State is one of the 36 states in Nigeria, bounded in the north by Kaduna State, in the west by the Abuja Federal Capital Territory, in the south by Kogi and Benue States and in the east by Taraba and Plateau States.

Nasarawa State is home to the Farin Ruwa Falls in Wamba Local Government Area of the state. Farin Ruwa falls is reputed to be one of the highest falls in Africa.

There is also the Salt Village in Keana Local Government Area of the State. It produces naturally iodized salt from the lake located near it. The town is also one of the cradles of Alago civilization, one of the major ethnic groups in the state. Another tourist site in Nasarawa State is the Maloney Hill.

Dignify your life by saving a life